First, I need to start this post with a cringe. I cannot STAND LAX. Oh my god. So when I landed at Terminal 7 on United’s flight from DEN, I set about immediately transferring to Terminal 2, where the international departures happen. To do that, I have to completely leave the terminal (bad), go through security again (bad), but didn’t have to recheck my bag thanks to United’s interline baggage policy (very good).

As I wandered through the fog outside LAX toward Terminal 2, I was reminded of why I can’t stand LAX, or LA in general. The airport is poorly designed, it’s literally falling apart, and each new process feels like pulling teeth, which kinda ties into the bad design.

When I arrived at Terminal 2, it was pretty easy to find the Aeromexico desk. I could hear it before it saw it. A cacophony of screaming Spanish. The occupy the old Northwest space. I know so because I could still see where they crossed out Northwest a few years ago and put up Aeromexico.

I waited in a long line to get my boarding pass, and credited the flight to Delta. Since it was a Q-class economy fare, I’ll get full mileage credit. The agent was friendly and efficient, but my god the people. It was a completely full flight.

The gate on the boarding pass read 24A. When I got to the gates, I checked the monitors like always and saw they’d changed it to 28. Fine. When I got there, people were lined up waiting to speak to the gate agents. Gross. Some of them were crying. Like, convulsing crying. Did I miss something? Was the gate change that dramatic? I heard a lot of people bitching about it while waiting in line.

The boarding process was almost comical. There were FAs literally showing people to their seat and stowing away baggage for the customers. First time I’d ever seen that happen. Even still, people were lost and confused. Watching the boarding process in an aircraft always makes me lose faith in humanity.

Aeromexico felt grimy, like they’d never cleaned the planes. The FAs were thorough, modern, and cultured, but the other passengers were like animals. I had three Mexican men in contact with me as they slept, snored, and randomly jerked. I was also the aisle bitch and was bumped CONSTANTLY. Jesus. I am not a big person. It takes effort to hit me. Also, every time someone came down the aisle, they clutched my headrest for dear life, which of course made my whole seat go back. This happened over and over and over. I won’t even mention the quantity of crying babies because you all know how much that thrills me.

The ride to GDL seemed like forever. It finally touched down at 6am. They did that Euro thing where they plop the plane down and make people take a bus to the terminal. Bus to terminal at GDL

Customs was a breeze. My company hired a broker specifically to get me through customs. All I did was present my declaration and touch a button. Within minutes, I was at the Delta counter receiving my boarding passes to ATL and EWR. After the hellish experience with Aeromexico, and um, I guess I’m now classifying it as hellish, I was thrilled to see those dark blue and brick red kiosks.

Final take on Aeromexico: right up there (down there?) with Alitalia. Wouldn’t be my first choice for travel, in any cabin. Why do all of Delta’s SkyTeam partners SUCK? View of mountains in Guadalajara from GDL

I’m on a roll on this GDL-ATL flight, and can see Texas below me. This flight was exactly what I’ve come to expect from Delta: solid, reliable, easy. Only bone: they had me in Zone 3 boarding. Really, Delta? I’ve got the card and everything. But other than that, this flight has brought back warm and fuzzy memories after being on United and Aeromexico the past couple of days.

Also, this flight really solidifies Delta Vs. American for me. I like them both equally. Dust, please settle.

Lots of people on here have cute Southern accents and it reminds me of home. Flying out of GDL was gorgeous. Guadalajara looks cute from above, and the mountains and canyons beyond the city were stunning. I wish I could’ve spent more time there. Oh! I should give thanks to Amex because I’m using some of my $200 airline credit this year to buy myself a margarita.

I have an evil plan for when I get to ATL. I want to get bumped, get a voucher and put on a flight that instead arrives at JFK. I hate flying into EWR. HATE it. I checked on the Fly Delta app, and my chances are 70/30 at this point that I’ll get bumped. So fingers are crossed.

Will report more from ATL SkyClub, which will be my first time there! Let’s keep this buzz goin’, Deltoid. 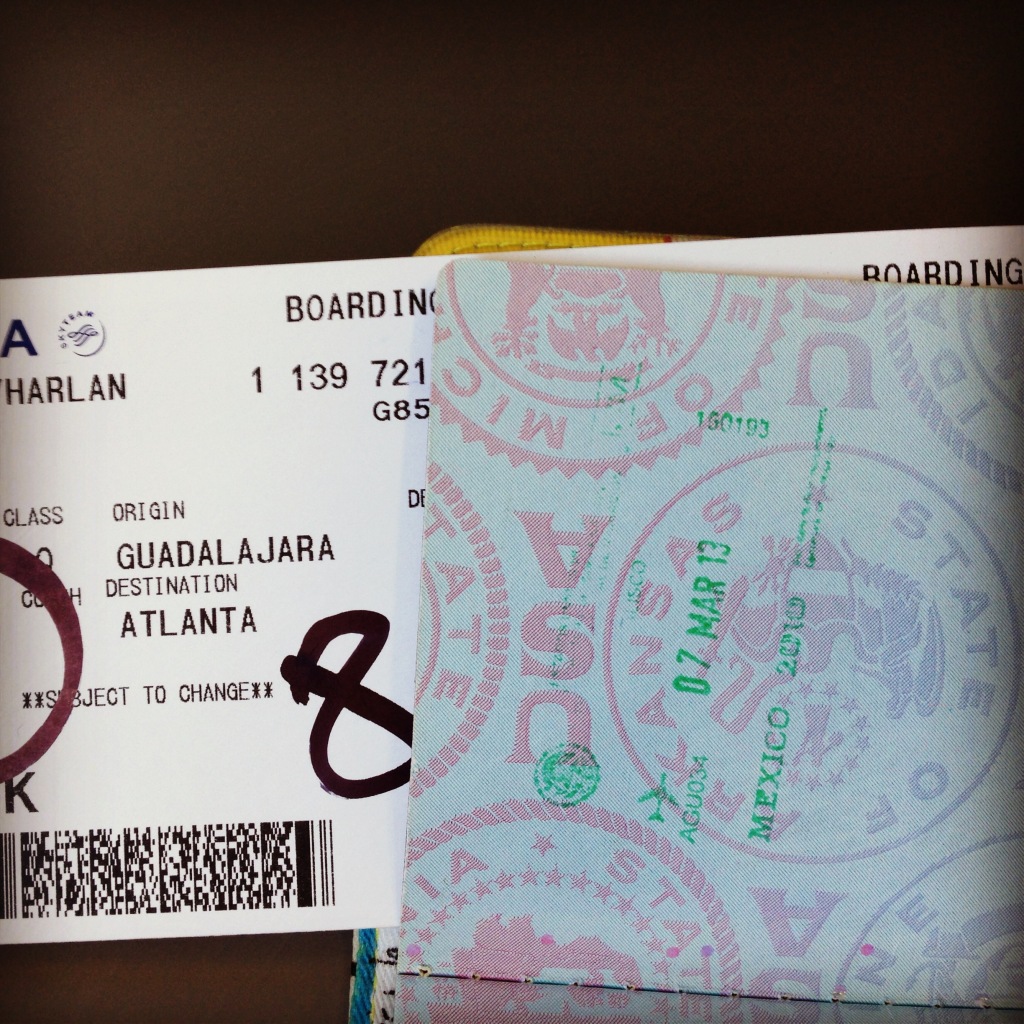 Another stamp on the ol’ passport

So I’m safe at sound now and wanted to update on the final flight, ATL-LGA. It was supposed to be to EWR, but I despise that airport and asked the agent the agent at the SkyClub if I could fly into LGA instead. Since the flight to EWR was delayed anyway, the agent was able to put me on the next flight to LGA. Score. Cheaper taxi ride!

Since the flight was in a different terminal, I headed over there to imbibe a drink instead. The SkyClub in Terminal A was HUGE, but man was it packed. I tried to go to the bathroom, and there was a line. The little bathroom only had two stalls, yet the SkyClub is built to accomodate about 200. Stupid. I left and went to the bathroom in the airport, which was actually emptier and had no line, then went to the SkyClub in Terminal T.

A vast improvement. Ample seating and much less crowded. I promptly grabbed a rum and coke and chilled for a sec. When I fly for over 24 hours then have a drink

It was really nice. I left soon after to go board. The boarding process was easy enough, and I got all settled into seat 29F. After everyone was on, the pilot announced that we’d have to deplane to change aircraft. The whole point of changing my flight was to get to New York sooner, not later. Anyway, after we boarded again, we sat on the tarmac for a while before we departed. Then, a couple of hours later, I was finally home after a long and crazy run out to GDL. The flight was quick, lots of turbulence, and I nodded off a lot. I felt so gross and tired when we finally landed, and hopped right into a taxi. Back in the snow

I did notice that when I got put onto the LGA flight that the agent knocked off the GDL-ATL segment, so I anticipate having to call about the missing miles and MQMs in a few days. The weather has sucked lately, Mercury is in retrograde, and pretty much all of my flights were delayed. But, I’m back in the NYC and looking forward to my next trip, wherever it may be.