I am over the moon right now because I just booked an epic trip to Paris in June. I have booked complex, multi-stop and RTW itineraries before, but even still, was amazed at how easily and quickly this trip came together.

END_OF_DOCUMENT_TOKEN_TO_BE_REPLACED

Since meeting the first spending requirement on my new British Airways Visa Signature, I have become Avios-rich to the point where I don’t know what to do with them all. It’s introducing all sorts of new issues, including problems I love to have (see: Dilemma of the Day: Which Caribbean Island?).

After I meet the next set of spending requirements, I’ll have well over 100,000 Avios and can do even more. I’ve also just discovered the BA eStore, which includes a few merchants I shop regularly at great payouts. I’m really getting into Avios for their practical purpose of short-haul flights (and for getting to Ireland on the cheaps!).

Quite simply: signup bonuses with no BS.

I’ve been hating on Amex a lot lately, and with good reason. I now have four Amex cards, three with Amex as the actual issuing bank, and with two of those three, I’ve had to make numerous phone calls, write emails, and send tweets to their support team about not getting a signup bonus. After a lot of back and forth, they usually award me a fraction of what I missed out on as “good will”, but it always leaves a bad taste behind and is like pulling freaking teeth with them.

In my opinion, if an Amex cardmember holds the Platinum Card, their most premium card offering with a hefty $450 annual fee, any other cards should automatically come with an enhanced signup bonus. Something extra. Instead, we see this sentiment in a lot of the T&C:

What?! Why? That’s so stupid to punish people for wanting to open more cards. This is where Chase excels.

They have a few cards that feed into their Ultimate Rewards program the same way Amex has multiple cards that can be linked to Membership Rewards. But Chase doesn’t impose rules on signup bonuses with multiple cards. You can get a Freedom, a Sapphire, an Ink, and whatever else you want to get and get the FULL bonus on all of them. If anything ever goes awry, just give them a call and it’s taken care of almost instantly.

Not with Amex. They’re notorious for their Financial Reviews and for not awarding bonuses… at all. They’re also really slow and claim to have to “research” your claim. Not only that, but their Membership Rewards program has lost a few key transfer partners in the past couple of years, along with a few other consumer unfriendly changes while Ultimate Rewards continues to improve.

There are a few sweet spots with Membership Rewards. For me, it’s the British Airways Avios. They’re a transfer partner for both Ultimate Rewards and Membership Rewards, which is pretty fantastic. Membership Rewards also transfer instantly to Delta, which would help me out a LOT with my dream trip to Australia if Amex would ever give me the points I deserve as a customer and card holder.

It goes beyond this, though. It’s about how the customer starts to view the company after a while. I’ve been screwed over by them a few times by now to the point where I’m thinking of switching all my spend over to Chase and giving Amex the finger. I wish it weren’t like this, though. Delta is pretty much forcing their customers to have a co-branded Amex to avoid the upcoming dreaded MQD component of the SkyMiles program, and I love having lounge access with the Platinum Card. But Chase always treats me so right while Amex continues to kick me to the proverbial curb.

So to Chase, I’d say keep doing what you’re doing. It’s working, and it’s so great. I have such a positive association with the company at this point. And Amex. Oh, Amex. Step up your game, because you’re getting your butt beat. I look forward to the day where I’m down to just the Platinum Card. In fact, Delta’s bid for more revenue is kinda sorta slowly driving me over toward American. But that’s a post for another day, and that post will be highly speculative.

When I think of Chase: I trust them, like them, want more of them.

When I think of Amex: Starting to shudder, need energy to deal with them, apprehensive about continuing to use their products. TOO. BAD.

Winner = Chase, hands down. Thoughts, anyone? 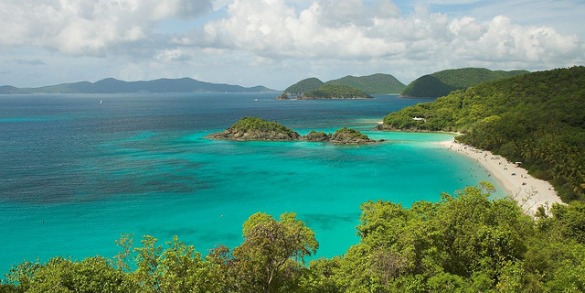 Just what the subject says. As part of the signup bonus for the shiny new British Airways Visa Signature that I got during my recent App-O-Rama, I will soon get at least 75,000 Avios – and hopefully 100,000 Avios. They’re great for short hops or some mid-haul jaunts under 1150 miles. The caveat is that they can only be used on places where Oneworld has routes. So no Philadelphia, no Burlington, no Portland (Maine), no Albany… surprising, right? But then I pulled up the American Airlines route map and the British Airways Avios Calculator to see where all I could go on the East Coast. My eyes drifted toward the equator, and I saw St. Thomas, St. Croix, St. Maarten, St. Kitts, and St. John just sitting there all lined up like a row of temptresses.

But NOT St. Croix (and St. John doesn’t have an airport). I haven’t experiment with other islands yet, but I did notice it was the same rate to Cancun, though I’m not really interested in going there. Even though it’s not a short- or mid-haul, 20K R/T to visit the Caribbean from New York is pretty good, right? And it’s much less points the further south you start out from. Which brings me to my dilemma. Which Caribbean island should I visit first? I’ve been to none of them and don’t know where to start. I know they’re all probably amazing, but which one is best for a beginner? The research continues, into the islands as well as into the value of Avios.  I’d love to go sometime between April and June.

This redemption really got the thinking when I saw it, so I thought I’d share. It might be old news to some, but sure brought a warm feeling to imagine those bright, sandy beaches. Really liking Avios right about now. And open to ideas!

The biggest thickest ever sky 😻 #cloudrider #

"You write. I tour. We make it work. You're beauti

🙌🏻 Well I did it. I posted every single day

"There are scratches all around the coin slot Like

🧿 Fear is excitement without the breath. 🧿